Mehreen Zahra Jiwan is a Fellow and Research Assistant at the Berkeley Institute for Islamic Studies. She is currently an MA student at the University of Toronto’s Department for the Study of Religion. She obtained her Honors BA in Near and Middle Eastern Civilizations and Peace, Conflict & Justice Studies with the Munk School of Global Affairs at the University of Toronto.

Numerous studies of Mamluk books congeal around luxury manuscripts. Doris Behrens-Abouseif’s monograph offers a new window into the production and reception of ordinary books in the Mamluk world.

Doris Behrens-Abouseif’s monograph titled, The Book in Mamluk Egypt and Syria (1250-1517): Scribes, Libraries, and Market (2019) is a historical study of the ordinary book as a commodity in the Mamluk world. Her work functions in many ways as an ethnohistorical study as she reads literary sources and documents (waqf) in conversation with the material culture of book production and the archeology of Mamluk monuments. Her multidisciplinary approach effectively draws links between books, the monuments built to house them, as well as the people involved in their production, circulation, and use. As Behrens-Abouseif herself notes, the academic treatment of books in the Mamluk world has focused on luxury books such as Quran manuscripts, while little has been written about Mamluk scribes and book production. (Behrens- Abouseif, p. 2- 4)

Moreover, historical studies of books in the Islamicate world seem to congeal around the classical period; resulting in very little scholarship with this line of inquiry pertaining specifically to the Mamluk sultanate. Behrens-Abouseif’s study thus delves into this fairly unexplored territory whilst carefully reflecting on moments of continuity and rupture between the classical period of Islam and the world of the Mamluks. It is perhaps this theme of continuity and rupture that allows the reader to appreciate her project as a contextual introduction for studies in Mamluk codicology.

Chapter 1 situates the Mamluk sultanate’s book patronage in the broad history of royal Islamic patronage from the activities of the early Abbāsids to the Fāṭimids and Ayyubids, whose libraries were most immediately relevant to the early Mamluks. Behrens-Abouseif identifies the Seljuk and Ayyubid instrumental use of waqf endowments of religious institutions, which the Mamluks inherited, as critical to the dynamics of book patronage.

Chapters 2 and 3 expound upon the legacy of waqf endowments in the production and character of libraries of religious institutions and private collections — both of which were equally notable sites of book production and circulation. Chapters 4 and 5 address the circulation and dwelling of books albeit from different perspectives. Chapter 4 describes the borrowing, loaning, inheriting, and copying of books as social phenomena through which books move across various strata of society.

Noteworthy here is Behrens-Abouseif’s interweaving of the documentary, literary and archeological archive of Mamluk Syria and Egypt. Her analysis allows readers to understand Mamluk libraries in their own terms; as collections of books preserved in cabinets or architectural features unique to the Islamicate monuments such as riwāqs in mosques or madrasas. This diffuses the book-culture landscape throughout the diverse buildings, markets, and monuments of Damascus and Cairo. Chapter 5 however, approaches this movement and circulation in terms of the book market, the commodification of books, and defining the roles of copyists, scribes, and calligraphers in the production and distribution of books. 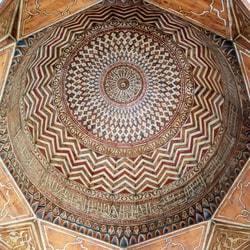 Chapters 6 and 7 outline questions of authorship and artistry as they relate to scribes and calligraphers (many of whom were both). These two chapters relate the production and circulation of books to the activities and cultural capital of Mamluk aristocrats, military elites, and intellectuals. Behrens-Abouseif’s final chapter traces the social genealogies of master calligraphers over the entire three centuries of Mamluk rule. She thereby provides readers with clear evidence for an established Mamluk heritage in the art and aesthetics of ‘the book’.

Behrens-Abouseif’s work is intended as a historical introduction to Mamluk books and codicological studies and thus her engagement with theory in relation to book production, authorship, and the book market is quite limited. Nevertheless, this monograph would benefit from at least framing certain social phenomena that the author observes in theoretical terms. For example, Behrens-Abouseif describes the ethical norms of book borrowing and lending with regard to scholars or bibliophiles and students. Book owners, she notes, are expected to be generous in lending their books to students while students in turn are expected to acquire permission to copy books. At the same time, the discussion surrounding the permissibility of loaning books in exchange for deposits was deeply contested. These are the conclusions that the author draws from the narrative sources she consults. However, this also raises questions of ownership and authorship and potentially plagiarism and vandalism which are not addressed.

While one cannot demand for the book to extend beyond the boundaries of its scope, it may be useful to think about how books and the norms associated with their production and use complicate the relationship between authors and readers, and especially students and teachers. Behrens-Abouseif cites Ibn Jamaʿa’s Tadhkira, which is a treatise on the etiquette of learning and teaching, throughout her study. This source and its likes (such as Shahīd al-Thānī’s (d.966/1559) Munyat al-murīd ) revolve around a learning ethos entrenched in the language of religious sciences. However, this study does not discuss the deeply religious character of the discourse surrounding the etiquette of reading, writing, book lending and borrowing, storage, carrying etc; outlined in these sources.

Behrens-Abouseif’s contributions to material culture studies in this monograph is quite significant, particularly in light of her presentation of the nuanced role of calligraphy in the world of book production and consumption. Her final three chapters may lend themselves to another important question in the field of art history: what do we mean when we say Islamic art?[1] Can we conclude that scribes working in the chancery were artisans devoted to the aesthetic creation of a book? What do we gain from thinking about the artistic (in this case, visual arts) enterprise of the scriptorium and writing and copying activities more generally? Behrens-Abouseif demonstrates how calligraphy was a locus for artistic skill, educational instruction, intellectual dissemination, and political appeal. Her findings elucidate the value that the materiality and aesthetics of book culture bring to our understanding of Islamicate societies.

While this is not an explicit goal of her project, her discussion works to dispel the orientalist myth of a scholastic Islam with an arid and deary uniformity and thus absent of any artistic diversity.[2] Behrens-Abouseif encourages us to reassess our understanding of Islamic calligraphy as both an art and an intellectual activity with political appeal. Her work is a model example of how historiographical studies can benefit from material culture studies in a way that produces a more holistic understanding of human societies. Behrens-Abouseif undoubtedly exemplifies what Avinoam Shalem suggests when he says, “One might even say that the history of Mulism communities is told through the narratives of artefacts.”[3]

Finally, while this study is specifically concerned with books, the extensive academic work on Mamluk documents may produce a more comprehensive history of Mamluk book culture. Behrens- Abouseif notes the absence of a Mamluk library catalog. (Behrens-Abouseif, p. 3) It is perhaps by no coincidence that Frederic Bauden observes the disappearance of state archives, noting that “students of medieval Islamic history are confronted with the leitmotiv that that until the sixteenth century Islamic civilization has left only a few documents.”[4]

Bauden states that the secretary in the chancery of Sultan Barqūq, al-Maqrīzī (d. 845/1442) whom Behrens- Abouseif oft refers to, explains that previously all of the documents were kept in the Citadel of Cairo’s dīwān al-inshāʾ. However, during the rule of Barqūq, these documents were removed and sold by weight, most likely to paper merchants. Bauden surmises that a similar situation may also explain the absence of private archives. Documents were frequently recycled or reprocessed and used as scrap paper when they were no longer considered relevant or valuable.[5] With this in mind, Behrens-Abouseif might consult some of the recent discoveries in the Geniza documents as well as other collections in order to find potential evidence or traces of catalogs or some type of list pertaining to Mamluk libraries.

Over all, Behrens- Abouseif provides a clear, accessible, and vibrant history of the book in the Mamluk world. While she does not delve into the intellectual history of books, which may have been useful even if only in a cursory manner, she critically engages with her primary sources and reads them with and against existing academic scholarship. She also clarifies terms that students involved in codicology may encounter such as the differences between juzuʾ and mujallad, and between nāsikh and kātib. This monograph is an essential introductory resource for students of Islamic manuscripts and Mamluk history.

[4] By documents, Bauden intends, “…everything that has remained immediately and directly of the historical facts or events.” Bauden summarizes a number of hypotheses for the disappearance of state archives in his article. See Frederic Bauden, “Mamluk Era Documentary Studies: The State of the Art,” Mamluk Studies 9, no.1 (2005): 17.

Mehreen Zahra Jiwan is a Fellow and Research Assistant at the Berkeley Institute for Islamic Studies. She is currently an MA student at the University of Toronto’s Department for the Study of Religion. She obtained her Honors BA in Near and Middle Eastern Civilizations and Peace, Conflict & Justice Studies with the Munk School of Global Affairs at the University of Toronto.
View all publications