A Green Christmas: Jesus’ Birthdate in the Islamic Tradition

A Green Christmas: Jesus’ Birthdate in the Islamic Tradition

The birth of Jesus Christ is celebrated by most Christians in the winter. However, a reference from the Muslim tradition and a recently discovered astronomical phenomenon could suggest that Jesus was born in June.

Early Christian tradition provides a variety of dates for Christ’s birth, but by the fourth century, during the reign of Constantine, the Church in Rome began formally celebrating Christmas on December twenty-fifth.[1] This nearly coincided with the established festival of Saturnalia, which marked the winter solstice.[2] Other solar deities, such as Mithra, were also commemorated on this astronomical occasion, marking longer days and representing the victory of the Sun over darkness. Interestingly, the belief that Jesus was conceived on the twenty-fifth of March, and therefore born nine months thereafter, may have had precedent in the third century.[3]

While the Quran recounts the story of Jesus’ birth, there is no extant tradition of the Prophet Muḥammad asserting its date. However, an alternative Christmas date can be found in a tenth century Shī’ī text called Tuḥaf al-ʿUqūl fī mā jāʾa min al-Ḥikam wa l-Mawāʿith min ʾĀl ar-Rasūl (“Masterpieces of the Intellects from what has come from the Maxims and the Exhortations of the Family of the Messenger”). Tuḥaf al-ʿUqūl is a compilation of sermons and sayings of the Prophet Muḥammad and the Shī’ī Imams, focusing on their ethical teachings. It was probably penned by Ibn Shu’ba al-Ḥarrānī, a scholar that we know little about. He was later described by the muḥaddith Ḥurr al-ʿAmilī (d. 1693 CE) and other authorities to have been “virtuous (fāḍil)” and “dignified (jalīl)”.[4] Tuḥaf al-ʿUqūl itself gained recognition early on, as it was quoted by Shaykh al-Mufīd (d. 1022 CE)[5] and popularized in Shī’ī and Alawite circles.

A major drawback of the work in question is that it lacks chains of transmission. The muḥaddith ʿAllāmah al-Majlisī (d. 1699) wrote in his Bihār al-Anwār that Tuḥaf al-ʿUqūl had no need for such chains, as it “mostly consists of exhortations and well-founded principles.”[6] Still, without external and contextual support, it is difficult to ascertain the historicity of its content. 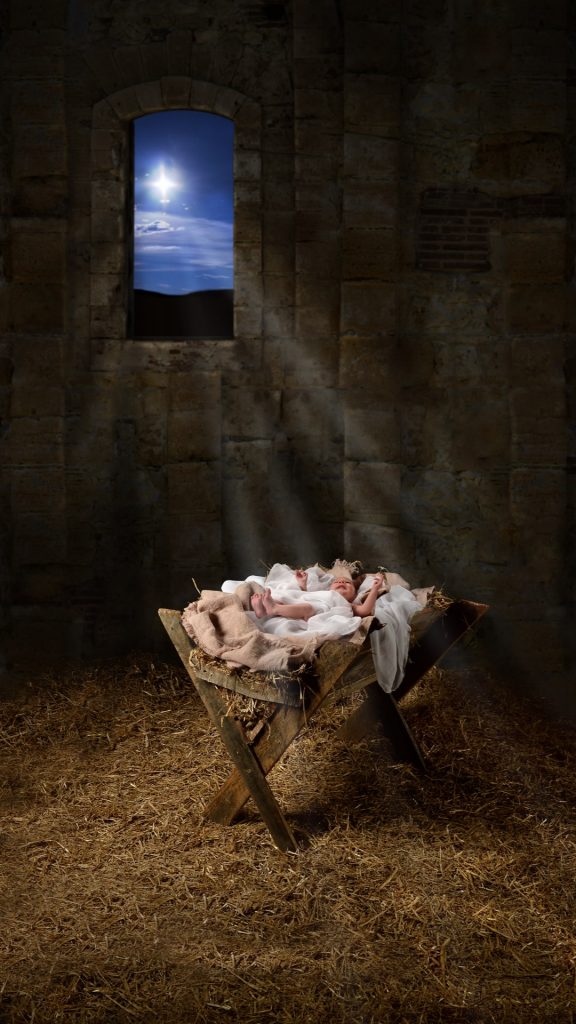 Baby Jesus on a manger as described in Luke 2:7.

Nonetheless, the “Christmas tradition” appears in a section dedicated to the sixth Shīʿī Imam Jaʿfar al-Ṣādiq (d. 765 CE). The Imam is told that the Christians were claiming that the “birth night” (laylatul mīlād) was on the twenty-fourth of December. So, the Imam replies by saying, “They have lied. Rather, it was in the middle of June. The day and night become even in the middle of March.”[7] What is remarkable about this tradition is that it replaces the Winter Solstice holiday with a Summer Solstice date. The “middle of June” (an unspecific expression that does not necessarily refer to the fifteenth of June) includes the longest days of the year. Jaʿfar al-Ṣādiq mentions the Spring Equinox, which takes place on the twentieth of March, to make a point about the equal length of the day and night. The longest day is the twentieth of June. This alternative date retains the solar nature of the holiday and preserves the imagery of Jesus being the “Light of the World.” Instead of his birthday falling on one of the darkest days of the year, it would fall on one of the brightest.

It would not be inconceivable for the author(s) of this tradition to have been familiar with the Biblical nativity narrative. According to Luke 2:7-8, shepherds were watching their flocks at the time of Jesus’ birth. Shepherds were not typically in the fields during December; though Awassi sheep have their lambing season in December.[8]  Still, most herding took place in the warmer months, and thus some have suggested that, according to Luke’s account, “Jesus may have been born in summer or early fall.”[9] Luke also mentions that Jesus was born during a Roman census, which would not have occurred during the winter months.[10] A summer nativity would also coincide with the Quranic account of Mary eating dates whilst in labour (19:25).

The exact date of Jesus’ birth may in fact be hinted in an astronomical phenomenon described in the second chapter of Matthew. The “Star of Bethlehem” was said to have appeared above Jesus’ birthplace on that night. According to Australian astronomer Dave Reneke, who used computer simulations to chart the position of all celestial bodies and map the night sky, a rare series of planetary groupings appeared in the years 3-2 BCE. Specifically, on the seventeenth of June in 2 BCE, Venus and Jupiter were so close that they would have looked like one brilliant star “shining unusually bright”.[11] Generally accepted research places the nativity somewhere between 3 BCE and 1 CE,[12] making this event a true possibility rather than simply a product of religious symbolism.

One cannot know for sure whether Tuḥaf al-ʿUqūl’s account is based on a forgotten Christian tradition or an ancient astronomical calculation. However, the symbolic and perhaps scientific value of this tradition is noteworthy; and it could be a bridge between the two great religions.

[10] Ace Collins, Stories Behind the Great Traditions of Christmas, 11.